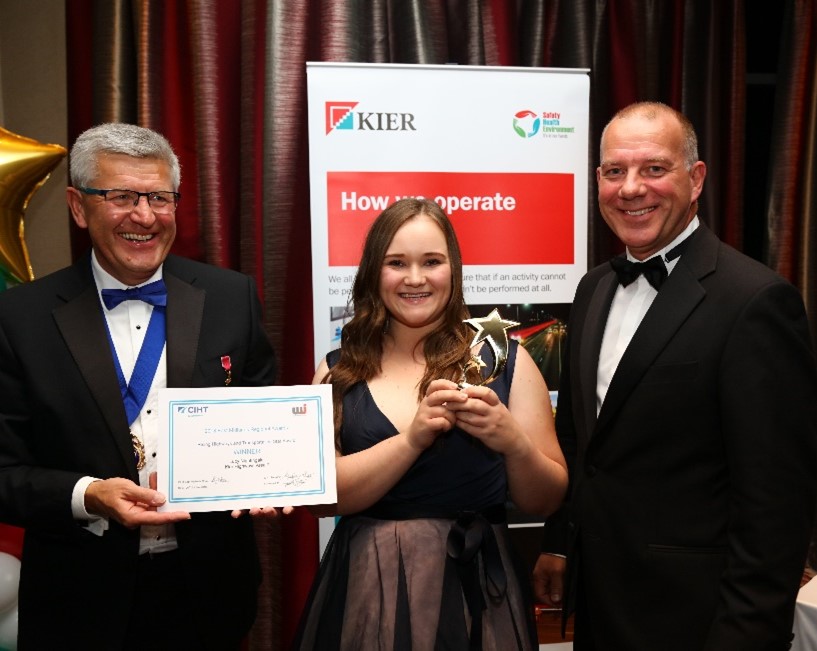 Having completed the programme, Lucy has earned a promotion, won awards and is now a role model for girls considering their career choices at school as well as for those women who aspire to greater heights in their employment.

“I jumped at the chance to attend the programme after hearing about it and reading some of the case studies online,” said Lucy, a Highway Engineer with construction giant Kier. “I had career ambitions, but I just didn’t know where to start and what I needed to do. I suffered from a lack of confidence, continually comparing myself to colleagues, and I felt very stuck in terms of speaking in public and networking, believing I just wasn’t good at it and that my nerves would never let me do it.”

Lucy’s career began as an apprentice working for a Civil Engineering design consultancy, later gaining experience through secondments to Local Authorities. She graduated after undertaking a part-time Civil Engineering degree on day release supported by Kier. Her efforts at University saw her awarded the Professor John Pike Award for Women in Civil Engineering for Outstanding Achievement and Contribution by Nottingham Trent University.

Lucy joined Kier in 2016 as an Assistant Engineer, specialising in designing and managing Safety and Improvement Projects on the Highways England Strategic Road Network.

“I was promoted to an Engineer following the course and also discussed my future career aspirations with my managers who agreed to support me,” said Lucy. “Setting and communicating goals was a large aspect of the programme, putting me in good stead for my future. I have also been able to get on the wider Kier Group radar for my efforts and recognitions this year and have had the privilege to be invited to attend a few events, meeting colleagues from other parts of the business.
“I am applying to undertake my professional review – the Career Development Programme has helped me stop putting it off, to make a plan and stick to it.”

Lucy has been a member of the Chartered Institution of Highways and Transport (CIHT) East Midlands Committee since early 2017, prior to this she was a Senior Programme Secretary for the Institution of Civil Engineers Graduate and Student Committee whilst at University. She has thrown herself into the CIHT Committee role and was nominated as the Regional Honorary Secretary in 2018.

Lucy’s experience and enthusiasm enables her to act as a positive role model to younger generations, she mentors apprentices at Kier and students still in education. She offers a variety of support such as giving career path advice to school leavers, having experienced the apprenticeship route herself, to organising work experience at Kier and Highways England for budding Highways and Transport Engineers. Lucy is also an active STEM Ambassador.

“The Skills 4 programme helped me realise that no one knows everything, some people are just better at selling themselves than others,” she said. “Imposter Syndrome is common and I realised that after having the courage to attend networking events, which the programme encouraged and coached me to do, that even the people who are at senior levels are just regular people with the same passion for the industry and their jobs as me.

“I recently delivered a training course to a group of 25 colleagues. Both the delivery of the training course and identifying that I had a specialism were things that I was able to do as an outcome of attending the Career Development Programme, which gave excellent advice and coaching on the preparation and delivery of presentations. I would have never had the thought or courage to do this otherwise. I also have interest from other contracts in the business and hope to roll out this training to those areas in the next year.”

Lucy says the programme has helped her grow in her role at CIHT. “I was asked to Chair a room of speakers at their Annual Young Professionals Conference. I had to introduce the speakers, keep timings for Q&A sessions, and generally ensure that both speakers and the attendees were happy and everything was running smoothly. The presentations were filmed just for a bit of an extra challenge. I was nervous but I relished every minute of it and would do it again in a heartbeat.”

In 2018 she was nominated for Kier Graduate of the Year, making the final five from a field of around 50 nominees, which saw her grilled by senior leaders as well as give a presentation. “I didn’t make it through to the top 3 but I am extremely proud of myself to have made it so far in the competition against so many other talented individuals,” says Lucy.

“To top a great year for me, I also won the CIHT East Midlands Rising Star Award for my contributions to the industry. 2018 was a frenzy of brilliant events and achievements, and this award was the icing on the cake.

“The Skills 4 course works. If you feel that you aren’t getting something then speak up and share your problem so that you can collectively come up with a way forward. Also make sure that you keep in touch with your cohort and course leader, I have found that sharing our successes and emailing each other for support has really helped me since the course finished.”