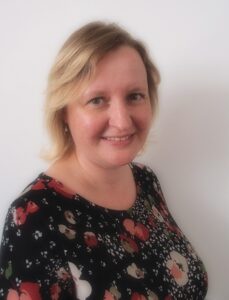 Dr Helen Wright is playing a key role in researching Rheumatoid Arthritis in the Institute of Ageing and Chronic Disease at the University of Liverpool –something which she believes may not have happened if it hadn’t been for the Skills 4 Career Development Programme.

The techniques she learned and the confidence she gained helped secure the prestigious position and keep her academic career firmly on track.

“It had been a very difficult time for me,” she said. “I wanted to continue my career in academia but to do so I needed to gain a Career Development Fellowship. I had applied for several fellowship schemes over a couple of years and not been successful, and while securing a fellowship is incredibly competitive with only around 10% of applicants being successful, it was knocking my confidence.”

All that was about to change.

Her university mentor was a keen supporter of getting more women into research roles and suggested to Helen she should go on a leadership and development programme.

As a member of WISE – the campaign for gender balance in science, technology and engineering – she came across the Skills 4 Career Development Programme, which it promotes and supports.

“I went on to the website and saw women from all different backgrounds giving video testimonials as to what the course had done for them,” said Helen. “I thought this sounds like me, though having been on so many training programmes over the years, I was still a bit sceptical.”

At the time, she was working in the University’s Institute of Integrative Biology and her application for the training to be funded was supported even in the knowledge it could lead to her moving department.

“It was absolutely brilliant,” she said. “I was with a group of nine ladies from public and private sector backgrounds doing one day a month over four months and we built a superb rapport with each other and our trainer.

“Each of us were able to give examples of difficult scenarios at work and then use the techniques we learnt on the course to tackle issues in a different way. By the end of the four months, more than half of the group had achieved a promotion or moved on to better positions elsewhere, which is quite extraordinary.

“During the course I was invited to interview for a fellowship application that I had submitted some months earlier, and it proved a career-defining moment. Techniques I’d learned, such as how to prepare for important meetings, to control visible signs of nerves, and conduct difficult conversations, were invaluable.

“I was able to confidently present my scientific proposal in six minutes and handle half-an-hour of questions with a panel of nine professors, with a Career Development Fellowship and £500k of funding on the line. I came out of the interview feeling I could not have performed any better.

“I didn’t want to show my face at the last training session had I not got the fellowship, but I was successful and I was able to share my story with the group, including how I had been in a room by myself for half an hour as the interviews were running late. Rather than panic I was preparing myself – even power posing!”

Helen’s research investigates the role of neutrophils (a type of white blood cell) in Rheumatoid Arthritis, a type of chronic, inflammatory arthritis which affects over 700,000 adults in the UK. The disease progresses quickly, often leaving patients with badly damaged joints, and her research is trying to identify markers that can be used to get patients onto appropriate drug treatments quicker. She now leads a team of three and her work has already been recognised, picking up the prestigious Garrod
Prize, open to scientists with a non-clinical background currently working in rheumatology or a related discipline, through the British Society for Rheumatology.

“The Skills 4 training gave me the confidence to put myself forward for the award,” she said. “I gave a presentation to 2,000 people at the National Conference in Birmingham, something I never imagined doing.”

Helen says the Skills 4 programme has also helped her time management, such as prioritising her busy work-load, and improved her work-life balance, particularly at weekends where she likes nothing better than spending time at the allotment or going for long walks with her husband and their dog.

“At times, it was tough and emotional because the training forces you to revisit difficult moments in your career and to look at how you would use the techniques to get a different outcome,” says Helen.

“It is much more than a Career Development Programme – it is career defining. I very strongly believe the skills I learned on the course were instrumental in helping me secure the fellowship. For me, it has enabled me to bring out qualities in myself I didn’t know I had or had never shown.”

Being recognised as a great company to work for is just one of the many positive outcomes training by gender diversity specialist Skills 4 delivered for Peter Brett Associates LLP (PBA).

Claudia Desai, PBA’s Director of People and Change, said the training had played a major part in improvements in the results of the staff engagement survey which had helped it gain entry into The Times Top 100 Best Companies to Work For.

As a leading development and infrastructure consultancy, PBA has 20 sites in the UK and Central Europe. It has a workforce of around 700 with skills across a broad range of disciplines, from engineering and planning, to regeneration and economics.

“Our industry as a whole remains male- dominated and there are not enough female role models,” said Claudia. “We needed change to cultivate, bring out the best and retain talented women in PBA.

“It became apparent that our female employees were not as engaged as they could or should be. We looked at the male/female split across the Practice and although it is nearly 50/50 at graduate level, the higher up the organisation, the fewer females there seemed to be.” While 33% of PBA’s workforce is female (higher than many of its peers), women are still under- represented in senior management roles.

Whenever there is training like the Skills 4 Career Development Programme introduced, there is always some scepticism and that was the case, even among some of the women who were nominated,” said Claudia.

“However, they have all become advocates and speak very highly of their experience on the programme and what it has done for them. We are asking them to nominate the next generation to go on the programme because they can speak about their experiences and show it is not just ‘training’; it is about career development and being able to have confidence as a woman operating in a male­dominated industry, and the impact of that will help us to recruit and retain good women. They can tell the nominees of their first­hand experiences.”

Claudia has seen a noticeable increase in confidence and greater input into the organisation through simply understanding the differences in the way men and women communicate.

“One employee fed back to me how she was able to hold an assertive (not aggressive), difficult conversation with a male colleague without becoming emotional and crying. “It is all about the awareness of the differences between how we communicate,” she said.

Those on the programme were asked to present to the Managing Partner, Chairman and Director of People and Change, on any perceived barriers women faced within PBA. This has prompted PBA to review some of its policies, practices, and planning of internal and external events to facilitate greater diversity. The company is now looking at holding more diverse client networking events and it has reviewed its family­friendly policies in support of career progression for everyone. There is a stronger community of women across the business to support each other.

Claudia said: “It doesn’t really matter whether you are male or female – the Skills 4 training is excellent and you can pick up tips to help progress your own career, help others to do so and create a stronger working environment, all of which is great for business. Our customer base is diverse; it is important that we are too. I will be really interested in seeing the retention and progression of women within PBA over the coming years.”

Paul Reilly, Managing Partner at PBA, said: “We want to build a diverse organisation that helps everyone to fulfil their potential. The Career Development Programme and Unconscious Bias training are enabling us to help empower our female employees at all levels to have a voice in shaping the culture and future of PBA for the long term, making us an even better place to work.”